This series of lectures is named after Gunter Lumer, a great mathematician with extensive achievements and a deep curiosity for applied functional analysis and operator theory, and is a joint scientific activity of all Action's Working Groups. The lectures will be delivered by carefully selected distinguished scientists whose research interests are related to our Action.

Gunter Lumer was born in Frankfurt, Germany in 1929. With Nazism on the rise, the Lumer family left Germany in 1933 and settled in France, and then in Uruguay. Gunter graduated in 1957 with a degree in electrical engineering from the University of Montevideo, he then received a Guggenheim fellowship to study at the University of Chicago. There he received his Ph.D. in Mathematics in 1959. Although Gunter Lumer's professional focus was on functional analysis, partial differential equations, and evolution equations, he nourished a broad interest for almost all areas of mathematics and for science in general. He published more than one hundred papers and edited many books. Probably his best known result is the celebrated Lumer-Phillips theorem, which gives necessary and sufficient conditions on an operator to generate a strongly continuous semigroup of contractions on a general Banach space. This result, published in the Pacific Journal of Mathematics in 1961, is a key contribution to the theory of operator semigroups. The research areas of our Action are closely related to some of Gunter's research activities in the 80's, and also brings together many of his collaborators and students. In a sense he is at the origin of the topics developed in this Action.

More details about Gunter Lumer's life and activities can be found on the following link.

Simone Göttlich heads the Scientific Computing Research Group at University of Mannheim. She studied mathematics at Technical University of Darmstadt and obtained her PhD in 2007 and her habilitation in 2011 from Technical University of Kaiserslautern. She is an expert in mathematical modeling, numerical simulation and optimization of dynamic processes with applications in manufacturing systems, energy networks, traffic flow and pedestrian dynamics She has  authored 88 journal articles on these topics and supervised 17 PhD theses. Since 2021 she is member of the editorial board of 'Mitteilungen der Deutschen Mathematiker Vereinigung’.
Abstract: Many transport phenomena appearing in engineering science can be described by time-dependent continuous models. Typical applications include traffic flow, gas or water networks, power grids and manufacturing systems. A particular focus will be on hyperbolic partial differential equations which has been used as successful tool for modeling and simulation. In the present context these equations are extended to networks in order to obtain an accurate description of the underlying, coupled physical problems. We explain the mathematical challenges behind the network approach and give an idea how control strategies can influence the dynamics. 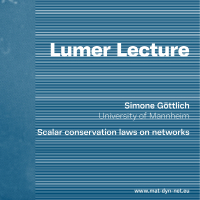 Abstract: Banach lattices and positive operators shall be the main actors in this talk. The role they played in various areas of mathematics and their main application areas both have been changing considerably and sometimes recurrently over time. In particular they found new playing fields such as ergodic theory and dynamical systems. We review the last 50 years of this story. 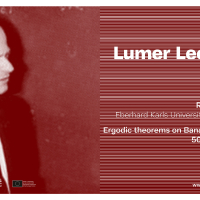 Rafe Mazzeo completed his Ph.D. in mathematics at MIT under the supervision of Richard Burt Melrose in 1986. After obtaining his Ph.D. degree, he joined Stanford University, where he became a full professor in 1997. He has published more than 150 mathematics papers, and his work has been cited more than 5000 times. His work has been published in many prestigious mathematics journals, including Annals of Mathematics, Inventiones Mathematicae, and Duke Mathematical Journal. He is one of the founders of the Stanford University Mathematics Camp. He has received many awards, including a National Science Foundation Postdoctoral Fellowship, Alfred P. Sloan Foundation Research Fellowship, National Science Foundation Young Investigator Fellowship, and Louis and Claude Rosenberg Jr. University Fellowship in Undergraduate Education. In 2013, he became a fellow of the American Mathematical Society.

Abstract: This talk will describe intrinsic and extrinsic curvature flows on spaces with `well-structured’ singularities, e.g. stratified spaces. The main focus will be on the simplest case, namely the curve-shortening flow on networks of curves, which already exhibits certain new phenomena. I will describe some complications in understanding strong solutions of this flow, and some advantages relative to weaker formulations, and in particular describe a new approach to flowing out of unstable configurations. I will also describe some new stability results by other authors.  If time permits, I will conclude by describing a few results and prospects for these questions in higher dimensional settings. 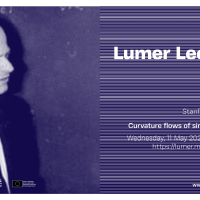 Enrique Zuazua (Eibar, Basque Country – Spain, 1961) holds an Alexander von Humboldt Professorship at the Friedrich–Alexander University (FAU), Erlangen–Nürnberg (Germany). He is also the Director of the Chair of Computational Mathematics at Deusto Foundation, Universidad de Deusto, Bilbao (Basque Country-Spain) where he leads the research team funded by the ERC – European Research Council Advanced Grant ''DyCon: Dynamic Control''. He is also a Professor of Applied Mathematics since 2001 in the Department of Mathematics of the Autonomous University of Madrid where he holds a Strategic Chair. His fields of expertise in the area of Applied Mathematics cover topics related with Partial Differential Equations, Systems Control and Numerical Analysis.

Abstract: Partial Differential Equations (PDEs) on networks is a ubiquitous topic in applications, from multi-link elastic structures to gas distribution. We will report on some recent results and open problems in the context of optimal location of sensors and actuators. On the other hand, at present Neural Networks (NN) are being systematically being employed as a complement to the traditional methods of Applied Mathematics, to bring our simulation and control capacities beyond. But the training of the parameters of these NNs leads naturally to new control problems. This generates a rich interface between Control Theory, Machine Learning and PDEs on Networks, that we will briefly survey on. 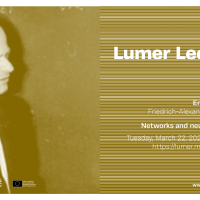 After being a student at Ecole Normale Supérieure in Paris, Laurent Desvillettes received his Ph.D. in 1990 at Univ. Paris 7 under Prof. Claude Bardos' supervision, his manuscript was entitled "Mathematical and numerical study of kinetic equations from Physics". He became Full Professor in 1994, successively at Univ. Orléans, ENS Cachan and since 2015 at Univ. Paris. He provided major contributions about mathematical and numerical properties of PDEs, in particular kinetic and reaction-diffusion equations with singularities, as much as on their applications in fluid mechanics, statistical physics and population dynamics. He is author of more than 120 papers, and serves as an editor and associate editor of several international journals. Upon invitation, he did many research visits among which the ones in Italy (Rome, Torino, Parma, Pisa, Messina), Austria (Wien), Spain (Barcelona, Bilbao, Grenade), Germany (Munich, Bonn, Mannheim, Göteborg), Netherlands (Leiden), Romania (Iasi, Bucharest), Switzerland (Zürich), UK (Cambridge), USA (Princeton, Brown, Stanford, UT Austin, Courant, Maryland), Canada (Laval), Japan (Kyoto), China (Beijing), Hong Kong, Singapore.

Abstract: Landau proposed in the late 30s to model the collisions between charged particles in a plasma by a bilinear operator sharing some similarities with the Boltzmann operator of rarefied gases, but containing second order terms (and sharing similarities with the Fokker-Planck equation). We propose to explain some of the properties of this operator and of the corresponding equation (describing the relaxation towards thermodynamical equilibrium of an homogeneous plasma). We will also present the analogies of this equation with other systems appearing in mathematical physics, such as the Navier-Stokes system for 3D incompressible fluids. 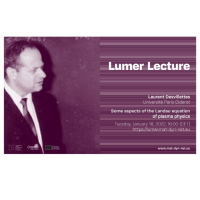 Wolfgang Arendt received his Ph.D. in 1979 and his habilitation in 1985 from the University of Tübingen, Germany. From 1981 until 1987 he was Assistant Professor at the same university, and from 1987 until 1995 Full Professor of Applied Mathematics at the University of Besançon, France. From 1995 until his retirement in 2018 Wolfgang Arendt was Full Professor and head of the Applied Mathematics Institute at the University of Ulm, Germany. He was visiting professor in USA (Berkley, Stanford), Australia (Canberra, Sydney), England (Oxford), France (Nancy), Italy (Lecce), New Zealand (Auckland), Poland (Torun). He supervised 34 Ph.D. thesis. He was awarded the Merckle research Prize in 1999. He is the author of over 140 articles and 4 books on evolution equations and spectral theory of one-parameter semigroups. He is editor and associate editor of several international journals.

Abstract: We start explaining how the  holomorphic version of the Lumer Phillips Theorem leads to the theory of forms. Then we study perturbations by weakly continuous forms. We obtain essentially coercive forms which generate asymptotically compact (= quasi compact) semigroups. Elliptic differential operators and Schrödinger operators are examples where this perturbation theory is efficient.

Essential coercivity occurs also in a completely different situation: it yields a topological characterization of the universal Galerkin property. This property means that the Galerkin approximation associated with the form and an arbitrary sequence of approximating subspaces converges (and this as fast as possible). 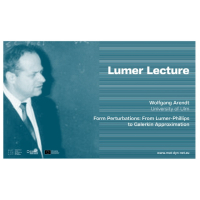 Marcel Filoche received his Ph.D. in 1991 from the Université Paris-Sud Orsay. He then worked for the France Telecom R&D center, before joining the CNRS in 1997. Since 2008 he is CNRS Research Director at the Condensed Matter Physics lab at École Polytechnique. Since 2018 he is also among the PIs of a research collaboration on Localization of Waves, sponsored by the Simons Foundations. He is the author of over 180 articles on biophysics, condensed matter, and wave phenomena in mathematics and theoretical physics.

Abstract: In disordered systems or complex geometry, standing waves can undergo a strange phenomenon that has puzzled physicists and mathematicians for over 60 years, called “wave localization”. This localization, which consists of a concentration (or a focusing) of the energy of the waves in a very restricted sub-region of the whole domain, has been demonstrated experimentally in mechanics, acoustics and quantum physics. During this talk, we will present a new theory which brings out an underlying and universal structure, the localization landscape, solution of a Dirichlet problem associated with the wave equation [1]. In quantum systems, this landscape also allows us to define an “effective localization potential” which predicts the localization regions, the energies of the localized modes, the density of states, as well as the long-range decay of the wave functions. This theory holds in any dimension, for continuous or discrete systems. We will present the major mathematical properties of this landscape. Finally, we will review applications of this theory in mechanics, semiconductor physics, as well as molecular and cold atom systems.
[1] M. Filoche & S. Mayboroda, Proc. Natl Acad. Sci. (2012) 109:14761-14766. 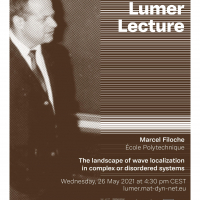